A Lesson Learned...and Some Unique (to me) Yarn

Keith and I had a great weekend at the LPGA in Sylvania, Ohio...near Toledo. The heat and humidity were intense so I opted to stay at the hotel on Friday. I almost melted on Thursday. Of course I had some great knitting hours. I started a pair of cabled fingerless mitts for a birthday gift for a friend. I completed about 2/3 of the first one on Friday.

Saturday I took my knitting to the golf course. I always take my knitting (used to be counted cross stitch) to the golf course. I was knitting on the mitt making the approach to the gusset increases when two guys plopped their chairs next to mine. They said hello. I responded. One had too many beers for any time of day, but considering it was before noon and his condition he must have started drinking the night before. He scowled at me so I ignored him. He then rudely said, "why are you doing such a ridiculous thing at a golf tournament." I said to pass the time and I went back to knitting.

They were quiet for a few minutes. I leaned down to the left to pick up my bottled water and I thought my knitting fell off my lap...that has been known to happen. When I straightened up I discovered the drunk had my knitting, had pulled out the double pointed needles and unraveled a good part of the project. I was furious but since there really weren't others around knew I needed to keep my cool.

I stood up and asked why he did that. Answer: So now you will have to watch the golf tournament. His buddy saw the look on my face and said he thought they better get out of there. I told him that was the smarted comment I had heard in the last few minutes. They left and I reported them to an LPGA official. But they were nondescript  so could not easily be found in a crowd.

The mitt is at the thumb gusset stage and will be finished by tomorrow. Then on to the second one. Knitting in Public can be hazardous to your progress.

On a happier note, today I was on the road working and saw a Farmer's Market with a sign "fresh lemonade." Wow I needed one. I pulled in, got my beverage and glanced around. Lo and Behold I came across this.... 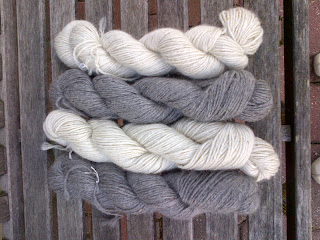 ...worsted weight Llama yarn. It is so soft and the cream is gorgeous as is the medium grey. Now off to consider patterns. Happy Knitting....
Posted by Kim at 6:21 PM No comments:

Several hundred people visited our shops today. Forefathers Book Shop and Main Street Yarn were kept very busy. Thank you to our new and not-so-new customers. We so appreciate you.

A big thank you to Celeste, Cathy, and Martha for handling the cooking of the hot dogs and pouring of the lemonade. People loved the free food and beverages on a hot day!

Katherine Dashner and Libby Beiler entertained and educated people about the process of yarn making -- from the sheep to the skein of yarn. They were in the shade but handle the hot outdoor temperatures with grace. They are members the team that won the 2013 PA Farm Show Sheep to Shawl competition. This team has won a number of times in the past few years. Quite a talented group! 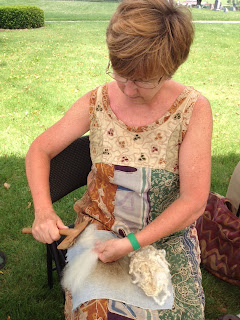 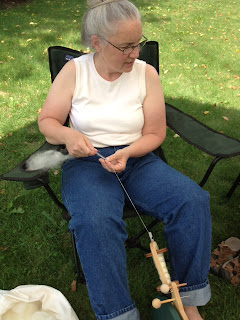 Katherine spins on her traveling wheel 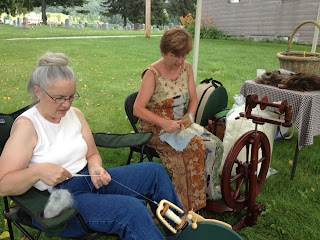 Team members working together
﻿
Posted by Kim at 9:28 PM 1 comment:

Last Saturday 7 fun women (I include the teacher in that group!) met at Main Street Yarn for a yarn dyeing class. They had such a terrific time and their finished products are absolutely gorgeous. I cannot wait to see what they knit from their hand-dyed fingering weight skeins of yarn. I know we will have a calling for more classes especially since Libby practiced another process this week and has an even more gorgeous product, if that is possible. Here are some photos and brief captions. Unfortunately they cannot capture all the fun, laughter and making or strengthening of friendships. 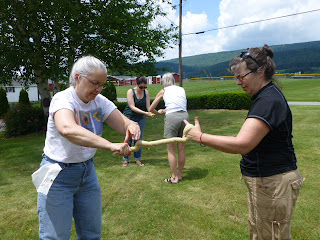 The yarn was soaked in water for about an hour before class began. Then the excess water needed to be wrung out. The yarn needs to be damp but not saturated for the dyeing process. Looks like a muscle builder! 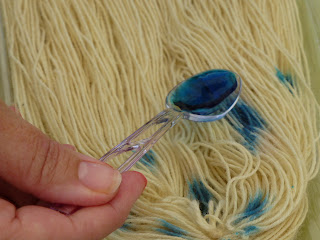 The Spoon Dab on Method... 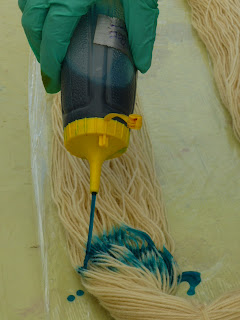 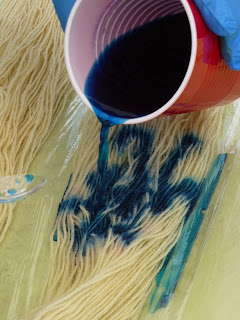 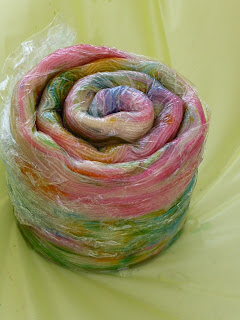 Wrapped in Plastic and Ready for the Microwave 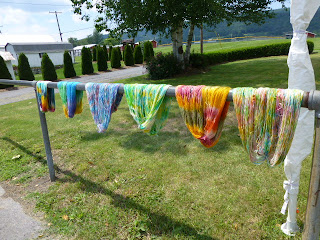